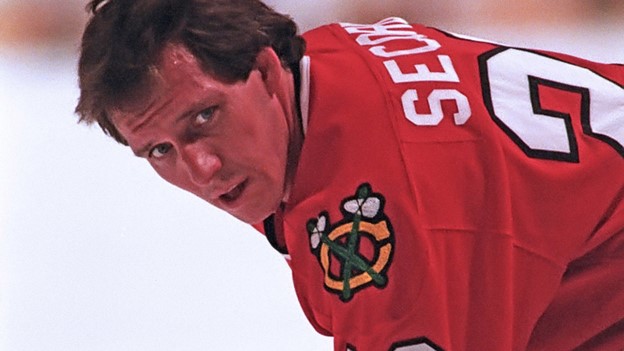 Born in Sudbury, Ontario, Al Secord played on the 1976 Memorial Cup winning team, Hamilton Fincups of the OHL prior to being drafted 16th overall by the Boston Bruins in the 1978 NHL Amateur Draft. Over a NHL career that spanned 12 years, he played for the Boston Bruins, Chicago Black Hawks, Toronto Maple Leafs and Philadelphia, scoring 273 goals and 222 assists for 495 points and registering 2093 career penalty minutes in 766 career games.

Secord made the Bruins roster as a 20-year-old in 1978-79, scoring 16 goals and adding seven assists but was traded to the Black Hawks after two seasons. It was in Chicago where the feisty Secord enjoyed the best years of his NHL career. In 1981–82, he burst forth with 44 goals in 80 games. He was also assessed 303 minutes in penalties, making him the only player in NHL history to record 40 goals and 300 penalty minutes in a single season. Secord joined the 50-goal club in 1982–83, posting 54 goals and 32 assists for a career-high 86 points and played in the NHL All-Star game for the second consecutive season. He was also part of the vaunted “Party Line” of the 1980s where he teamed up with Steve Larmer and Denis Savard to form one of the most lethal lines in Blackhawks’ history.

Secord was dealt to the Toronto Maple Leafs in a blockbuster trade on September 3, 1987 where himself and Ed Olczyk went to Toronto, while Rick Vaive, Steve Thomas and defenceman Bob McGill headed to Chicago. He spent two seasons with the Maple Leafs, before being dealt to the Philadelphia Flyers midway through 1988–89 season. Secord re-signed with Chicago as a free agent and finished his NHL career in 1990, scoring 14 times in 43 games. He retired from pro hockey until 1994, when he returned to play two seasons with the International Hockey League (now American Hockey League) Chicago Wolves.

After retirement, Secord became an airline pilot with American Airlines and resides in Southlake, Texas, a suburb of Fort Worth. He has three sons, Ryan, Alec and Luke. He sometimes does work on behalf of the Chicago Blackhawks' Alumni Association and also coaches youth hockey in the Dallas area with the Texas Jr. Brahmas organization.