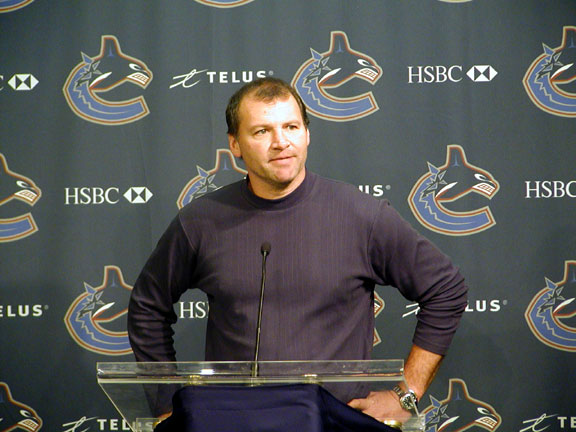 Doug Bodger enjoyed a 16-year professional playing career in the National Hockey League. Drafted ninth overall by the Pittsburgh Penguins in the 1984 NHL Entry Draft, Bodger played in 1,071 games in the NHL with the Penguins, Buffalo Sabres, San Jose Sharks, New Jersey Devils, Los Angeles Kings, and the Vancouver Canucks. During that time Bodger recorded 528 points (106g-422a) along with 1,007 minutes in penalties.

Born in Chemainus, BC, Bodger was a standout junior player in the Western Hockey League, where he was twice named the best defenceman on the Kamloops Junior Oilers and was also named a WHL all-star in both his junior seasons.  With 190 points in two seasons of junior hockey, Bodger was one of the top prospects going into the 1984 NHL Entry Draft, being ranked the seventh greatest prospect by the NHL Central Scouting.

Bodger made his NHL on October 11, 1984 against the Boston Bruins and he retired on December 14, 1999 with the Vancouver Canucks as the highest scoring defenceman from British Columbia and in 2006, he was inducted into the British Columbia Hockey Hall of Fame.  During his career, he played for Canada at three World Championships, in 1987, 1996, and 1999 and was named the team's best defenceman on the 1996 team that won the silver medal.

Today, Bodger is in his fifth season as an Assistant Coach with the Victoria Royals. Prior to his time with the Royals, Bodger worked as an assistant coach for the Shawnigan Lake Bantam Prep team (2015-16) of the Canadian Sport School Hockey League. Doug and his wife Tracy have two children, son Ryne and daughter Rachel.