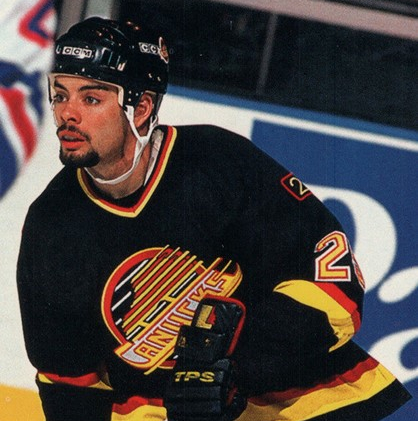 What if Nathan Lafayette didn’t hit the post in Game 7 against the Rangers in 1994? Drafted by the St. Louis Blues in the 1991 NHL Entry Draft, Lafayette played for the St. Louis Blues, Vancouver Canucks, New York Rangers, and Los Angeles Kings. Over his 6 years in the NHL, he played 187 regular season games but due to injuries, his career was cut short.

Winner of the CHL Scholastic Player of the Year in 1992 while he was a member of the Cornwall Royals, Lafayette helped Canada win the 1993 gold medal at the World Junior Championships. He made his NHL debut during the 1993-94 season playing for the St. Louis Blues but was traded to Vancouver later that season and had a strong playoffs helping Vancouver reach the 94 Stanley Cup Finals where he remains best known as the player who hit the post in the final minutes of the 1994 finals between the Rangers and the Canucks in Game 7, a game Vancouver lost 3-2.

After retiring from hockey in 2000, his father, a successful insurance executive, guided his son into a partnership to start Travel Guard Canada. The company, an arm of Travel Guard International, offered travel insurance plans to Canadian travellers. He is now the Senior Vice President and Chief Insurance Officer of BCAA based out of Vancouver.